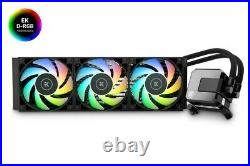 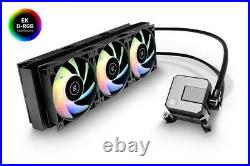 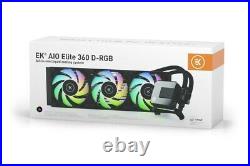 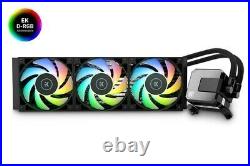 3831109829820 EK Water Blocks EK-AIO 360 Elite D-RGB All In One CPU Water Cooler - 360mm :: 3831109829820 (Components > Cooling Fans Modding). Images for illustration purposes only. Details The EK-AIO Elite 360 D-RGB is an all-in-one liquid cooling solution for your CPU. It offers all the benefits of a water-cooling solution in a compact, easy to install, and maintenance-free design. The EK AIO Elite comes with a universally compatible CPU water-block, along with a pre-filled pump-res combo design for a liquid cooling solution that???

Dynamic Addressable D-RGB lighting - Customize your EK AIO to match your set-up with its range of fully addressable D-RGB lighting effects. Built into both its CPU block and six Vardar S fans, the EK AIO Elite offers a range of color configurations controlled from either your motherboard or standalone D-RGB controller. The Black Nickel cover of the pump unit now offers a very elegant look with the subtle hint of D-RGB peeking through the EK logo. This product is compatible with popular RGB sync technologies from all major motherboard manufacturers. The arrow marking on the 3-pin LED connector is to be aligned with the +5V marking on the A-RGB (D_RGB) header.

Ultra-durable design with diamond-cut rotary fittings - The EK AIO comes pre-installed with reinforced and sleeved rubber tubing, each fitted with an aluminum cover to ensure they??? Its diamond-cut rotary fittings allow for easy installation and adjustment of the rubber tubing, featuring a full range of movement to make the EK AIO suitable for installation in even the tightest spaces. EK-Vardar High-Performance Fans - The EK-Vardar S included with the EK AIO are industrial grade high-static PWM fans, designed and built primarily for high-performance liquid cooling systems. Controlled by either your motherboard or standalone fan controller, the EK Vardar can be adjusted to run at speeds between 550 - 2200RPM for either high airflow or silent running. The EK-AIO Elite includes six Vardar fans, which can be utilized to create a push-pull configuration or if there is not enough space, create a better airflow by positioning three of the fans on the case itself.

Cable management - To help manage the cables of EK-Vardar fans, the EK-AIO Elite unit comes with an included EK-Hub, offering multi-connection with seven sets of addressable RGB LED headers and 4-pin PWM fan headers. The EK-Hub will help you neatly organize the Push-Pull fan configuration. The quantity of fans (apparatus with rotating blades that creates a current of air for cooling or ventilation). The material from which a thing is or can be made e. The sockets (plugs) for processors that are supported (can be used) by the device. LGA 1150 (Socket H3), LGA 1151 (Socket H4), LGA 1155 (Socket H2), LGA 1156 (Socket H), LGA 1200 (Socket H5), LGA 2011 (Socket R), LGA 2011-v3 (Socket R), LGA 2066. The size of the fan, measured by the distance from one side of the fan to the other, via a straight line going through the middle of the fan. Fan dimensions (W x D x H).

120 x 120 x 25 mm. This item is in the category "Computers/Tablets & Networking\Computer Components & Parts\Fans, Heatsinks & Cooling\CPU Fans & Heatsinks". The seller is "morefrom" and is located in this country: GB. This item can be shipped to United Kingdom.